Workers who are unfairly dismissed or underpaid are able to turn to the Commission for Conciliation, Mediation and Arbitration (CCMA) to hold employers to account. Recently workers who were unfairly dismissed by Luxor paints were awarded 40 million rands in back pay after winning their case at the CCMA [1]. Despite the CCMA having an extra 40,000 cases in 2020 [2], instead of increasing their budget, Finance Minister Mboweni has started cutting their budget. Workers need the CCMA now more than ever. If enough of us come together we can force the Minister of Finance to tax the rich and reverse budget cuts to the CCMA.

More than 11 million people in South Africa are unemployed [3] and the COVID-19 pandemic has made workers that much more vulnerable given the state of economic affairs. It is crucial to make sure that the ongoing retrenchments and job losses as a result of the pandemic are not unjust, and the CCMA plays a crucial role in ensuring that. The CCMA has had to reduce the number of its commissioners, stop walk-ins, among many other services, in order to deal with severe budget cuts announced by Minister Tito Mboweni in the June supplementary budget and the October medium-term budget policy statement, as well as safety measures of the COVID-19 pandemic [4]. Advocacy group the Casual Workers Advice Office has noted that some of these measures are unlawful and it “abandons the mandate to defend vulnerable workers as unemployment soars” [5].

Unemployment has hit record highs in Mzansi [6]. This widens the poverty gap and leaves low-income people in Mzansi burdened financially. Making sure that the CCMA continues its mandate to fight for labour justice creates a system of accountability, making sure no one is denied labour protection just because they are financially unable to afford drawn-out legal battles. We call on you to stop budget cuts to the CCMA and increase resources to employ fulltime commissioners, to empower the CCMA to carry out its important service for the good of workers in Mzansi. We call on you to increase the personal income tax on people earning more than R1 million a year, starting from 1 April 2020, and to commit to introducing a net wealth tax from 1 April 2022, and include this in the draft 2021 Rates and Monetary Amounts Bill.

Return to petition
388 of 500 signatures
The CCMA provides free labour justice interventions in a country already battling deep inequalities. We need to put pressure on Treasury to stop budget cuts to the CCMA, to help ensure that labour justice is not denied.

Next step - spread the word

Say no to Treasury cutting the CCMA’s budget 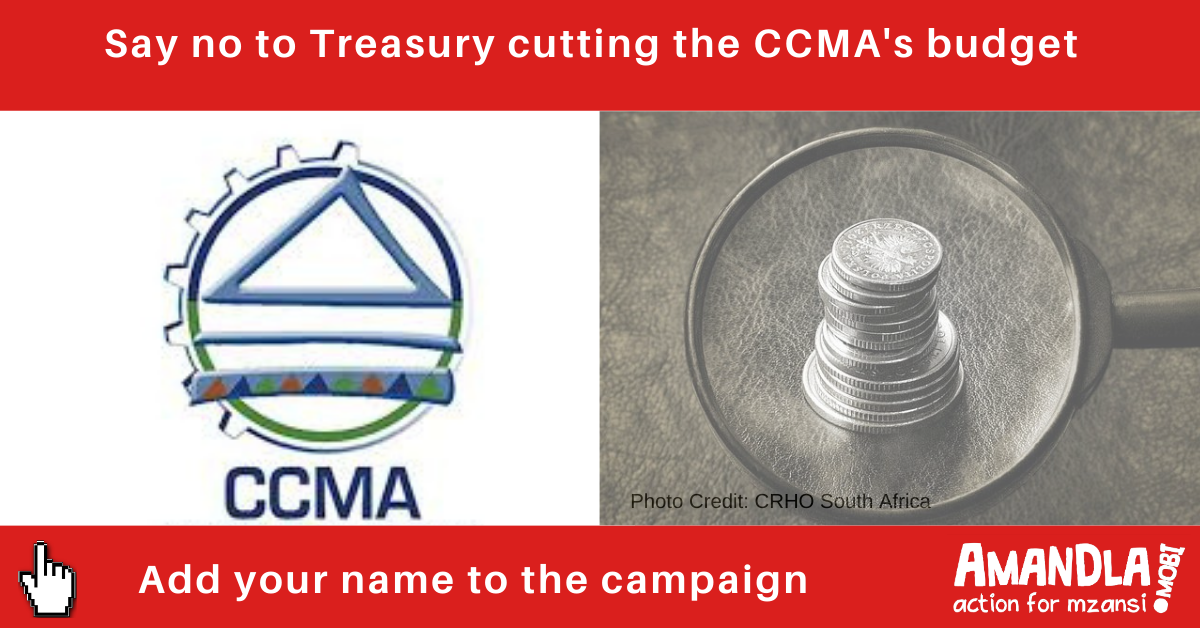 Thank you for signing. Please share to recruit others